Call it love at first sight. Or better yet, puppy love. Whatever you prefer to call it, one thing is for certain, when a long-time dog breeder finds a product to help his canine companions, he’s glad to share the results.

Wyatt Orr, Rocking Chair Puppies near Mediapolis, Iowa, was skeptical when he received a sample of the Vitalize® Dog Recovery Gel. He and his dad raise popular Teddy Bear puppies – a cross between Shih Tzu and Bichon Frise – and have sold and shipped them to 49 states. With companies constantly asking them to try their products, Orr was unsure, but when his neighbor and BioZyme Area Sales Manager Kori Soutter offered a sample, he accepted.

“The real test was when I gave it to the puppies and none of them got sick on the way to the vet, which is very unusual. So, we started giving it to everything before any stressful situations like that. We really, really like the Vitalize Recovery Gel. It’s nice to not have a bunch of slobbery, messy puppies once I get to the vet,” he said.

In addition to the pups, he has also started giving all the new mothers a couple of doses of the Vitalize Recovery Gel post-whelping. He said the name holds true and helps in their recovery of stressful situations.

“The Recovery Gel gives their body that extra dose of energy. They recover, are not quite as sore and are more perky faster. We’ve started giving it to everything after they have pups.”

The Vitalize Dog Recovery Gel is a 3-in-1 gel that provides faster recovery during stressful times such as high performance, antibiotic therapy, worming, surgery recovery, sickness or digestive upset such as diarrhea or vomiting. The gel contains the right balance of vitamins, minerals, amino acids and antioxidants as well as MOS and Amaferm® for maximum support of immunity and stress recovery. Amaferm is a precision-based prebiotic that impacts intake, feed digestibility and nutrient absorption to help combat stress and support the animal’s own immune system. It is research-proven to stimulate beneficial bacterial growth which has many benefits including competitive exclusion of pathogens created during stress and improved digestive health.

Healthier pups and perkier mothers made Orr a believer out of the Amaferm advantage. However, he said his dad is more traditional and set in his ways and was still unsure even after Soutter stopped by to visit with them about their results. Then, the father-son duo was listening to a breeder conference that same evening where two Vitalize products were mentioned, and his dad suggested they try those products with the Amaferm.

“It was funny I beat him to it. Then, the ‘experts’ said the Amaferm is really good stuff, and I was already using it,” Orr said with a chuckle.

Progressive dog breeders like Wyatt Orr understand that keeping their dogs healthy and vigorous is important. The Amaferm advantage is important to him, his dad and their puppies. Give your canine companions the good gut feeling they deserve with one of the dog products from Vitalize and discover the Amaferm advantage yourself. 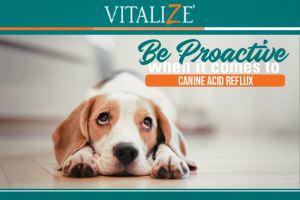 Many of us have experienced heartburn. Perhaps after overindulging at a family holiday potluck or eating way too many of Aunt Janet’s famous spicy meatballs. You are experiencing acid reflux, and, often, your next step might be reaching for the antacids.  Fortunately, we can identify and treat our own discomfort. However, our four-legged canine friends […] 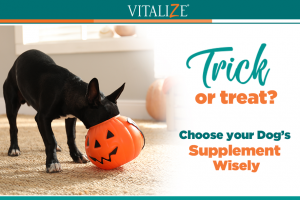 Man’s best friend deserves only the best care. As humans, you don’t skimp on your daily supplements, so you probably don’t want to skimp on your dogs’ either. But how do you choose? Walk through any pet store or down the pet aisles at any retailer and you are bombarded with a plethora of options […]