Dogs. They are more than man’s best friend. They are constant companions of young and old, travel buddies, working partners on the ranch and sometimes even serve as short-term “baby-sitters.” For dog owners, most can’t picture their lives without their furry friends. So, you can imagine the angst for Abby Maas and her family when 7-year-old Cheyenne became ill earlier this year. The Australian Shepherd/German Shepherd/Border Collie mix quit eating, resulting in significant weight loss. Her once shiny, soft hair coat turned dull and wiry.

This spring when Cheyenne quit eating, her owner suspected she might have worms, which she is susceptible to. Once Maas took Cheyenne to the vet, the beloved dog was diagnosed with Babesiosis, a tick-borne, blood disease that is often fatal. The vet prescribed an antibiotic, but still Cheyenne was not eating.

“I couldn’t get her to eat anything. She wouldn’t even eat table food,” Maas said. “The veterinarians didn’t know if the antibiotics were going to treat her or not, especially since she wasn’t eating.”

Next, the veterinarians recommended an appetite stimulant for dogs that had only been approved for use within the past two years. Although Maas didn’t have much information about it, she was willing to try the sample her vet sent home with her. Cheyenne started eating until Maas invested in the large bottle of product. Then, her dog stopped eating again. Maas was running out of resources, and losing hope, until she told her local BioZyme® dealer, Liz Heitshusen, about Cheyenne.

“Liz sent home some of her Vitalize Dog Supplement, and I put it on Cheyenne’s food that night. She started eating right away. It was a miracle! Within two weeks I started noticing big differences in her shedding. Her coat is shiny, and it is the best it has ever looked,” Maas said. “I’m really thankful the Vitalize helped. The appetite stimulant was costing $6 or $7 per day, when she was even responding to it, and that wasn’t going to last forever.”

Maas said she started Cheyenne on Vitalize in late May, and now the dog gets it in her daily feedings. Maas is grateful she found a product that worked for her four-legged friend, but she isn’t surprised.

“I started feeding my horses the Vitalize® Equine Free Choice mineral in February this year. Their hair coats have totally transformed. I used to buy hair sheen and sprays, but now the mineral is all I need for them. It worked for the horses, and now it’s worked for my dog,” she said.

Maas does notice if she runs out of Vitalize Dog supplement for a day or two because Cheyenne starts shedding again. So, she makes sure to have the next jar on order when she is getting low. 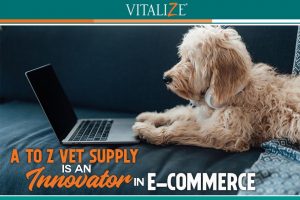 Online shopping; some say it is a double-edged sword, but it is here to stay. It is an efficient way to purchase the supplies a person needs and wants without fighting crowds and pushy salespeople. Others contend that it takes away from local businesses. However, one BioZyme® dealer, who is an innovator in e-commerce, has […] 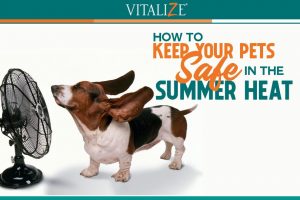 Dog might be man (and woman’s) best friend, but the excessive heat is nobody’s friend. With heat indexes into the triple digits, it is important to make sure your four-legged friends with built-in fur coats stay safe from heat stress and heatstroke this summer. We offer a few suggestions to be proactive in keeping your […]